"I just recently completed the C.D.L class A driving class. I'm writing to say, Thank You to everyone involved. Ed Bonia was my classroom instructor and Steve and Jay were my instructors for the in-truck part of the class. All of them were extremely professional, informative and patient. They all knew how to instruct and keep things light at the same time. I think everyone in the class appreciated that. I know I did. On the day of the road test Steve also became an on the spot psychologist to calm everyone's concerns and he pulled it off with obvious skill. All three instructors are class acts. With their knowledge and expertise, I feel prepared to take on any task as a professional Truck Driver."
Jeff Ferland
"The Parker School is excellent. I'm just sorry that I didn't find out about the Parker School earlier. I would like to thank everyone at the school for all the help they gave me . . . I already put my CDL A License to use. One week after I got it! I'm driving a Freightliner with 400 H.P. cat engine and a 15 speed trans."
Jim Ricardo
"I tell everyone who will listen how great your training is and how much I enjoyed attending Parker Professional Driving School. I strive to uphold the high standards I learned from you every time I drive."
Steve Hoey
"At Parker's, if you ask a question they answer it and don't make you feel dumb. Everyone encourages you to ask and learn. There was no pressure in the classroom or in the truck. The school has a very professional look and attitude. Don't change anything; the school served me very well. The Parker way is the only way."
Bob McGonigle
"I would have never passed the CDL road test without the professional training that I received at Parker Professional Driving School. After I passed the test and got my license, Parker's job placement has been there for me every time, all the time. They helped me prepare a great resume and set up job interviews. The staff has been instrumental in directing my career path. Bottom line is I am working, working, working and loving every minute of it."
Paul Greatrix
"I am writing to you to thank you for your professional instruction and your wide range of experience in teaching me how to operate a tractor-trailer to acquire my Class "A" License. I want to thank you most of all for your patience and encouragement when there were times I thought that I could not drive a car, let alone a tractor-trailer. I want to thank Lisa for her contagious smiles, her continuous words of encouragement, and most of all her World Famous Brownies without which I would not have made it. I want to thank Gary, John, and Steve for their instruction, experience, patience, and hope that they recover from the whiplash that they received from my thick headed-ness and lack of coordination.

I want to thank you, Jim, for your professionalism in the structure of your driving school, your kindness, and having a quality staff without whom I would not have accomplished, my goal of obtaining my Class "A" License.

I am 50 years old and am in a sense, starting a new life and a new career. I know that I have only acquired the basics in operating a tractor-trailer and that only through experience will I become a Professional Driver. You have set me on the right road and have given me the confidence and skills to look forward to a rewarding career, in the trucking industry. Who says that you cannot teach an "Old Dog New Tricks?"
James Wagoner
"In March of 2OO1 I got injured at work. By July I was told that the job I used to do, I could not do anymore. I sat back and started to think of things I could do and came up with driving a truck. I checked all around but never heard about your school until two months before I was ready for training. A friend that went to NETTS told me about your training program, so I investigated. Your school had a big plus because the troopers came to you on test day.

I called and had a good talk with Kathy; she is a real asset to your office. She gave me all the information I needed. The next day I took a ride there for the test and to pre-register. While there I met Gary and we talked about the school. After leaving, I decided that this was where I wanted to come and I'm not sorry at all.

The classroom with Gary was interesting, even though I went there with my permit. I did learn from Gary so much so that on the second week, I went and took my Hazmat and double & triple test. The 3rd week the fun began. I was in the hands of the big guy, yep FRED (The get out of my truck guy).

Now Fred makes a lot of noise on the field. He was always yelling at someone for some reason, but let me tell you it must have helped out. I followed Fred around to listen and learn, everything he told me I tried to remember. Fred is a real good teacher even if he is rough around the edges at times.

Fred opened his toolbox and gave us all his tools of the trade. The final results are 3 out of 4 testing on Sunday Jan 2Oth passed with no problem, even in the snow. Only one guy failed but he'll pass the next time, I'm sure of that. I can't thank that man enough for all the help he gave me and I won't forget all the times he yelled at me to get out of the truck.

I also remember the help you gave me when I had a problem with my right side parallel park. You took the time to explain to me what I was doing wrong and I corrected it and was able to do it with no problem after that.

The last week, we were all going 4 out of 4 on the test, except the last day when Fred gave us our test time. He said it was normal for a bunch of grown men to fall apart and not be able to pass his test on that day, but we would all do just fine on test day. The voice of encouragement was always there; ya sure, "Get out of my Truck !!!"

When I first visited your school, I read the letters on the wall. Well here's another one for the wall. It is a testimonial to your school and the fine class of teachers you have.

Thank you so much Fred, Kathy and Gary and all the other guys I had contact with while there."
Edward Moniz
"I just wanted to tell how happy I am that I picked Parker to take my training. Everyone at your school was very honest, supportive, and professional. There wasn't a question they couldn't answer, a problem they couldn't solve. Everyone really cared about my progress, every step of the way. I thought the classroom might get a little boring, but Gary kept everyone's attention by making sure everyone was well prepared to pass the permit test. He has a great sense of humor too. I'll never forget his words of wisdom, 'JUST DO IT'. I really enjoyed and learned a lot from the classroom.

My road and maneuver training was great. The instructors were patient and really helpful. Doug really made sure I had the pre-trip and air brakes down cold. By the time he got done with me, I could say it in my sleep. He's a definite perfectionist. That's why I got a 91 out of a possible 92.

I was especially impressed with Peter. He is definitely in the right job. I've had experience in the education field myself. I was a teacher's aide for 2 years, and I trained some new employees at my former job. He has so much patience when students are having problems. He makes you feel comfortable and confident. He doesn't loose his temper. Everyone in my group liked him. He is really a great guy, and a great instructor.

Again, I have to tell you how happy I am that I picked your school. You've got a great team. Thank you Jim."
James Magee 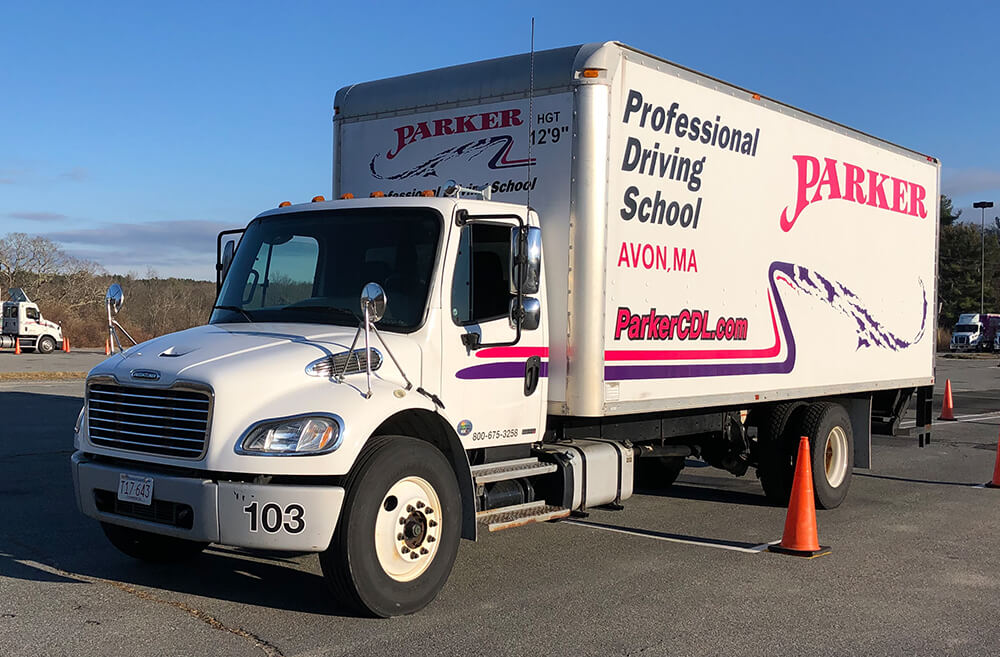 CDL Training for Class B Truck 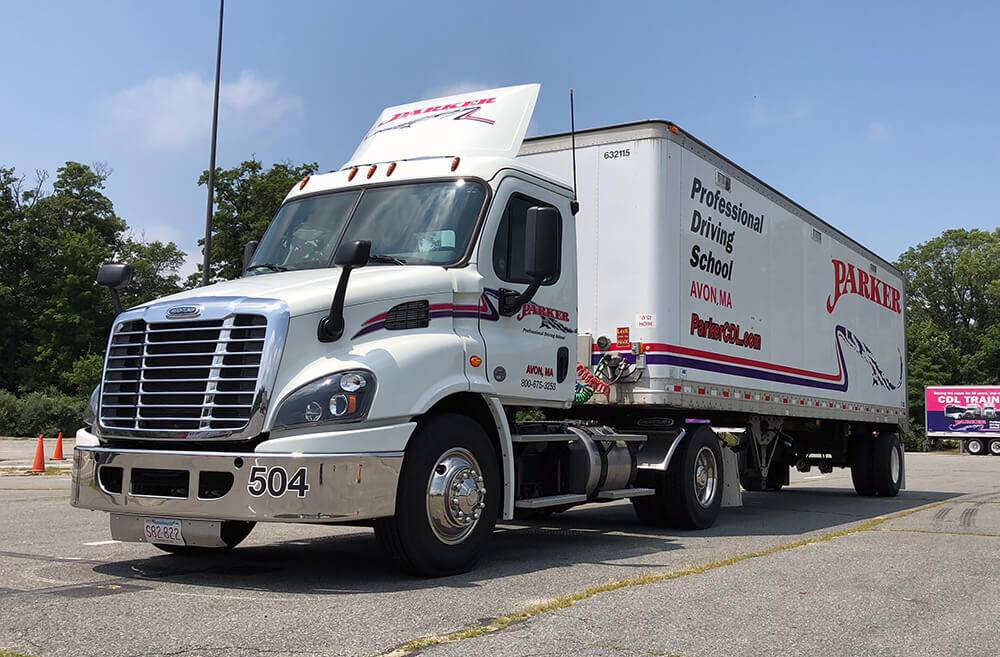 To look up the license information for Parker Professional Driving School, Inc, please visit elicensing.state.ma.us
* Enter the License Entity as “Office of Private Occupational School Education”, and under “License Number”, Enter 13100005 to Search.

Approved by Massachusetts state approving agent for veterans training. Accredited Business by the Better Business Bureau since 1998 Licensed by The Commonwealth of Massachusetts Registry of Motor Vehicles & The Commonwealth of Massachusetts Division of Professional Licensure Office of Private Occupational School Education. Member in Good Standing with National Safety Council & Better Business Bureau. The official language for the Parker Professional Driving School web site is English. Please be aware that translation of our site’s content is an automated process powered by Google® to provide a basic understanding of our web content. Computerized translations are only an approximation of the web site’s original content. The translation should not be considered exact and in some cases may include incorrect language. Parker Professional Driving School is not responsible for the accuracy of any translation using this service. Website design and maintenance provided by Gustin Advertising.